BEND, Ore. — In our first drive review of the 2020 Hyundai Palisade, I summarized it as “a well-rounded entry that checks just about every box for would-be buyers of three-row crossovers.” That included exceptional value, a high-quality and visually appealing interior, colossal space (underlined by a luggage test) and sterling safety credentials. Was it particularly memorable to drive? Not in any way, but it was seemingly vice- and irritation-free, which to be honest, is the bar most shoppers are trying to clear.

Fast forward a few months and there was a new 2020 Palisade Limited sitting in my driveway ready to embark on a fall road trip to Bend, Ore., a go-to locale for family road trips here in Oregon. My wife and I would be packing it with a modest load on the way there, but once in Bend, we would be ferrying around friends to various hiking spots and a float-in point on the Deschutes River. All rows would be utilized.

While the trip didn’t change the overall impression of the Palisade, it did bring to light a few things not touched upon in the first drive. Most involved this new Hyundai’s impressive array of technology. 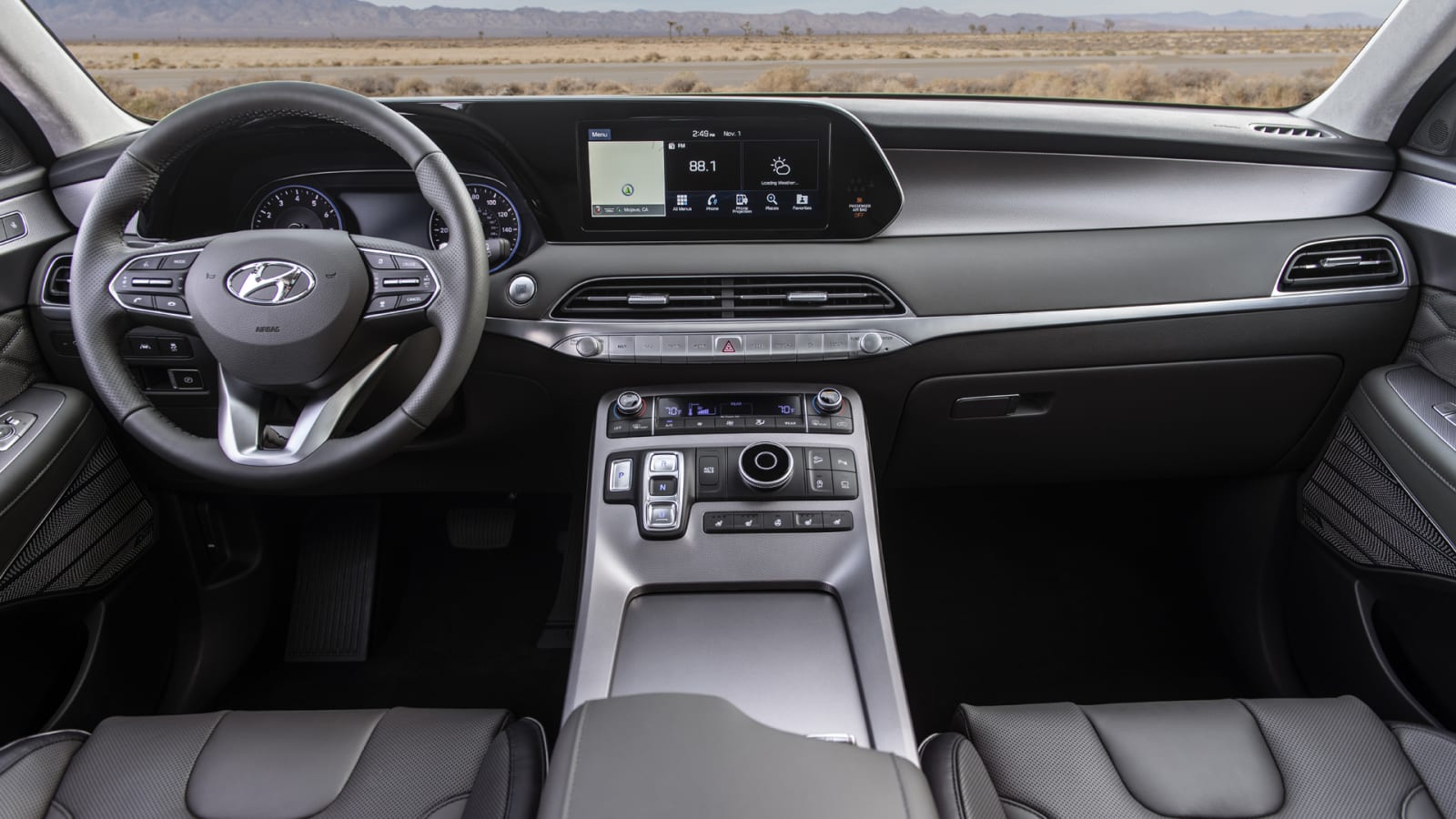 This quantity of equipment is certainly noteworthy, but more important, it works very well. The adaptive cruise control accelerates and brakes as a good human driver would (unlike Honda’s system), while its steering assist keeps this big SUV smartly centered in its lane even on a winding mountain road. It did a much better job in that regard than BMWs I’ve recently tested, and impressively, both the adaptive cruise control and steering assist elements continued to work flawlessly in heavy rain. Lexus systems have repeatedly informed me they cannot work in such conditions.

It’s also noteworthy that the Palisade’s safety aids don’t drive you nuts with constant beeping (Subaru) or false alarms (Honda). If you’re so irritated that you shut these systems off, who cares if they’re standard? 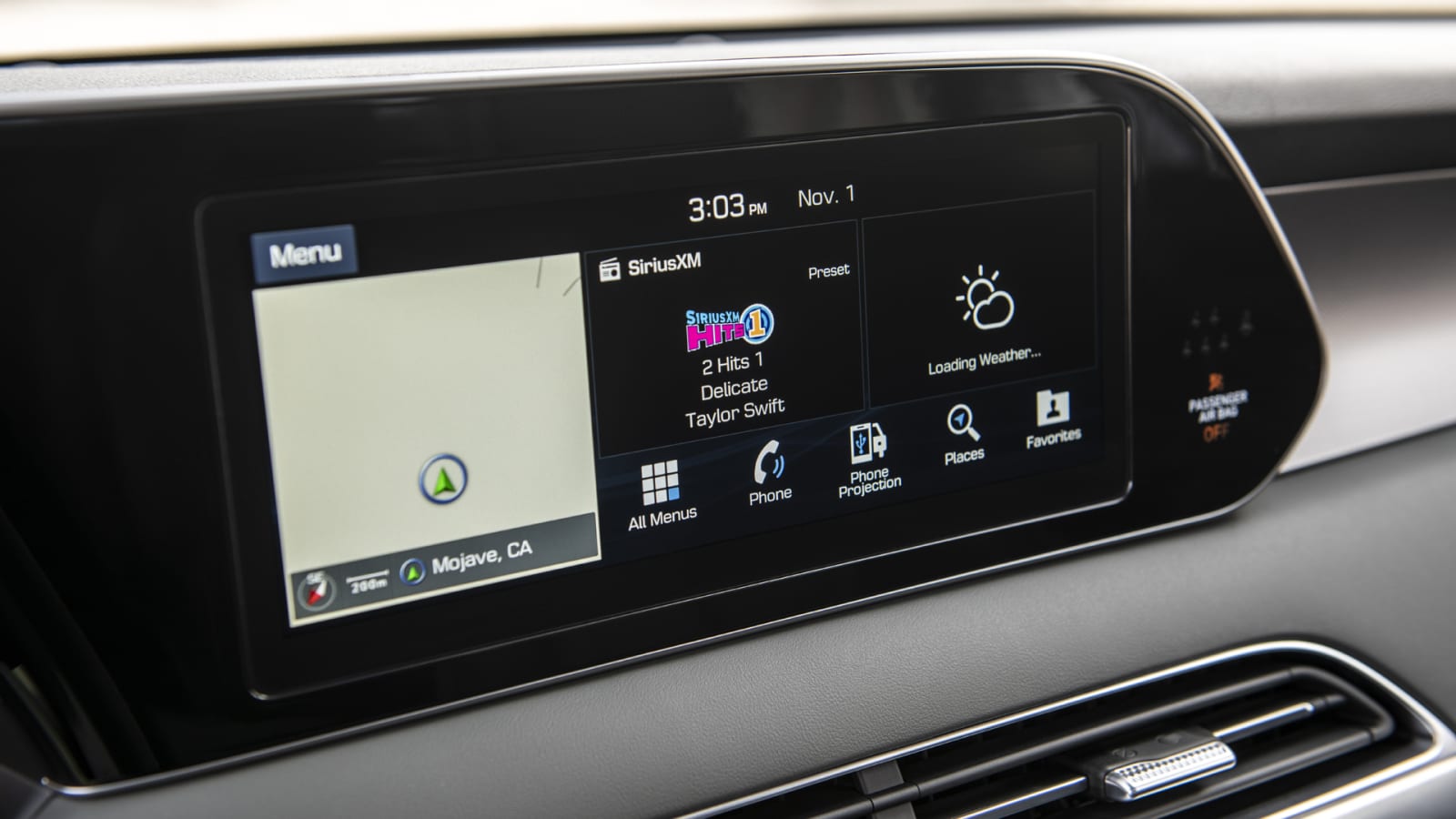 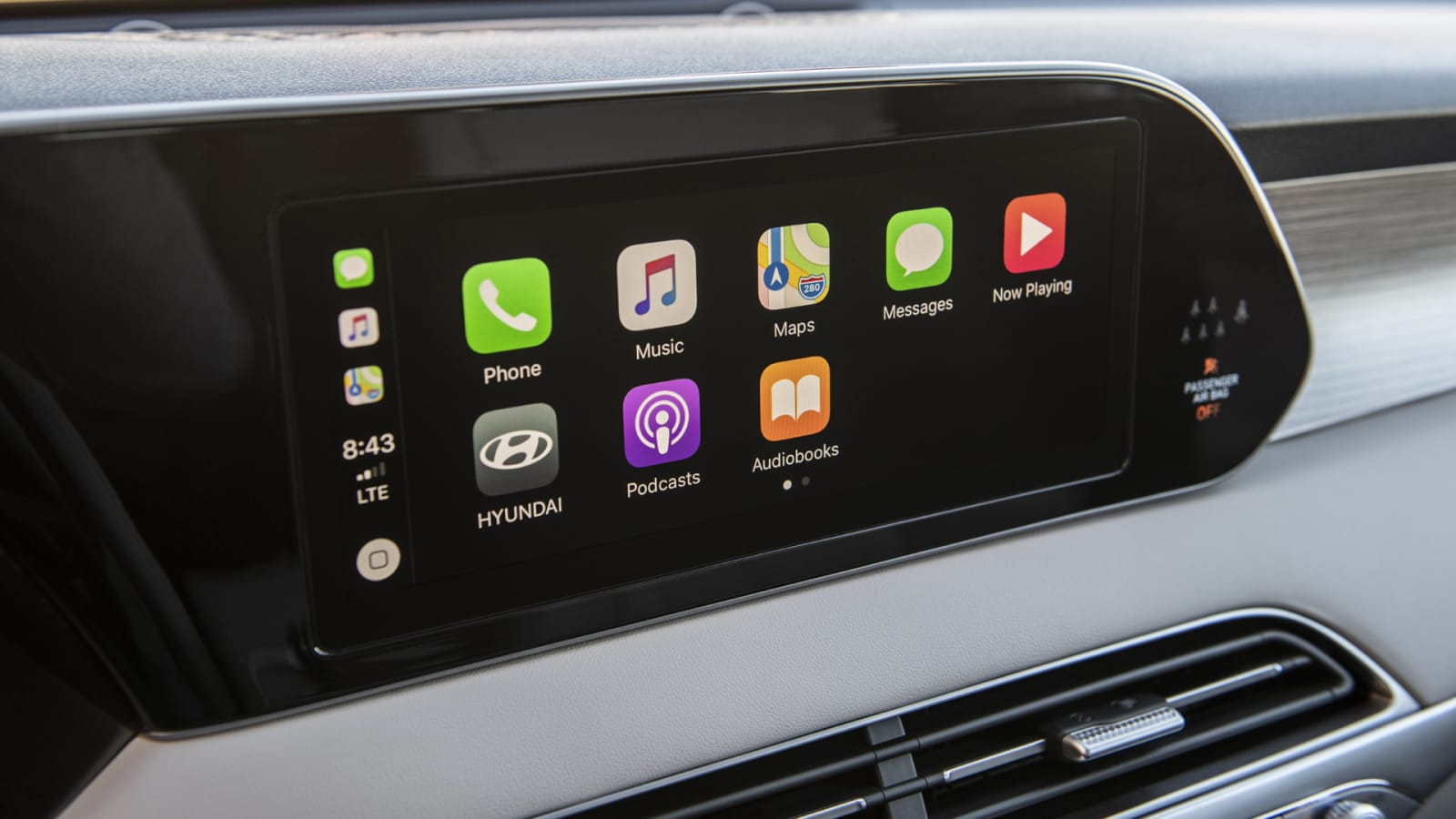 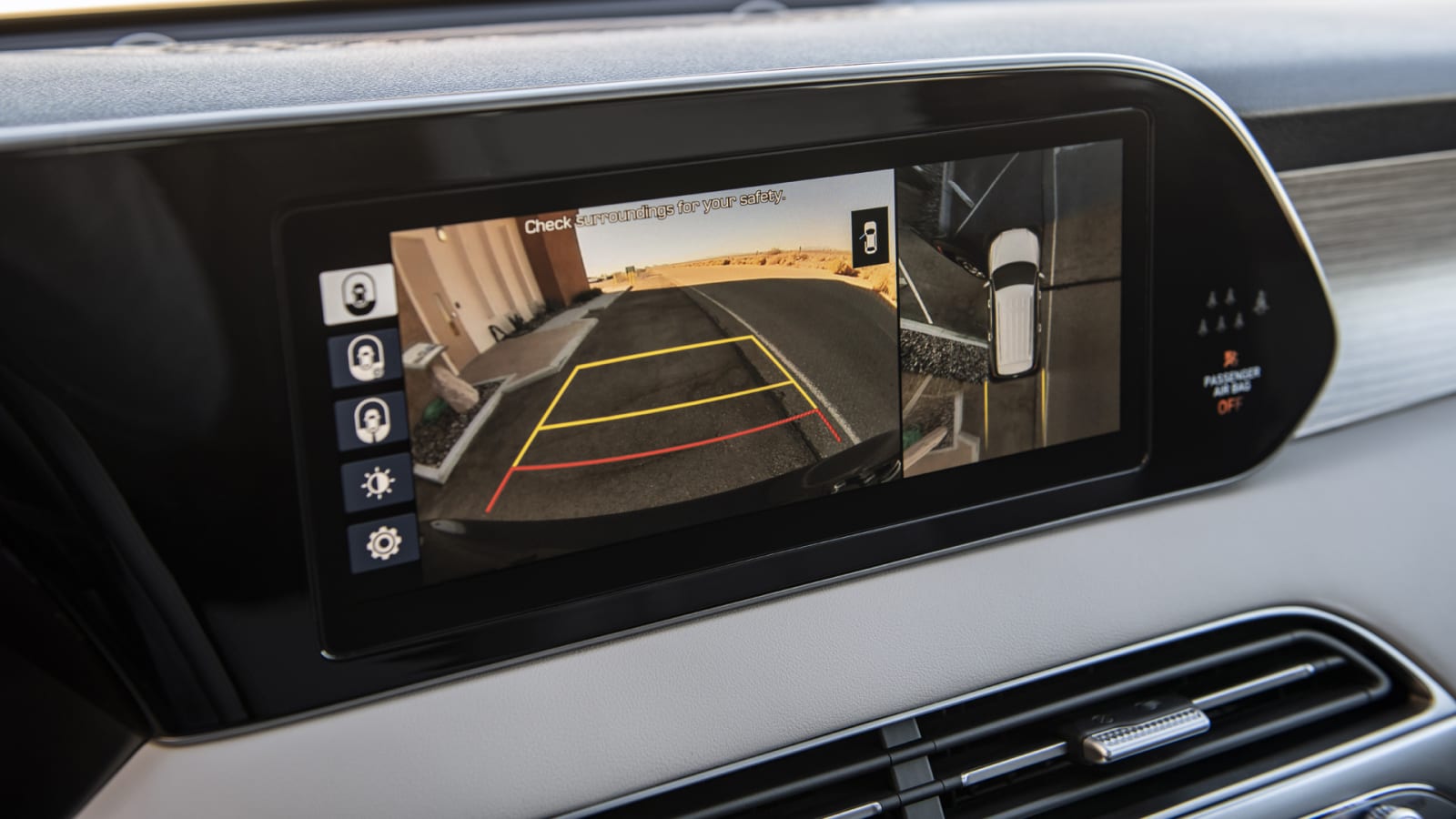 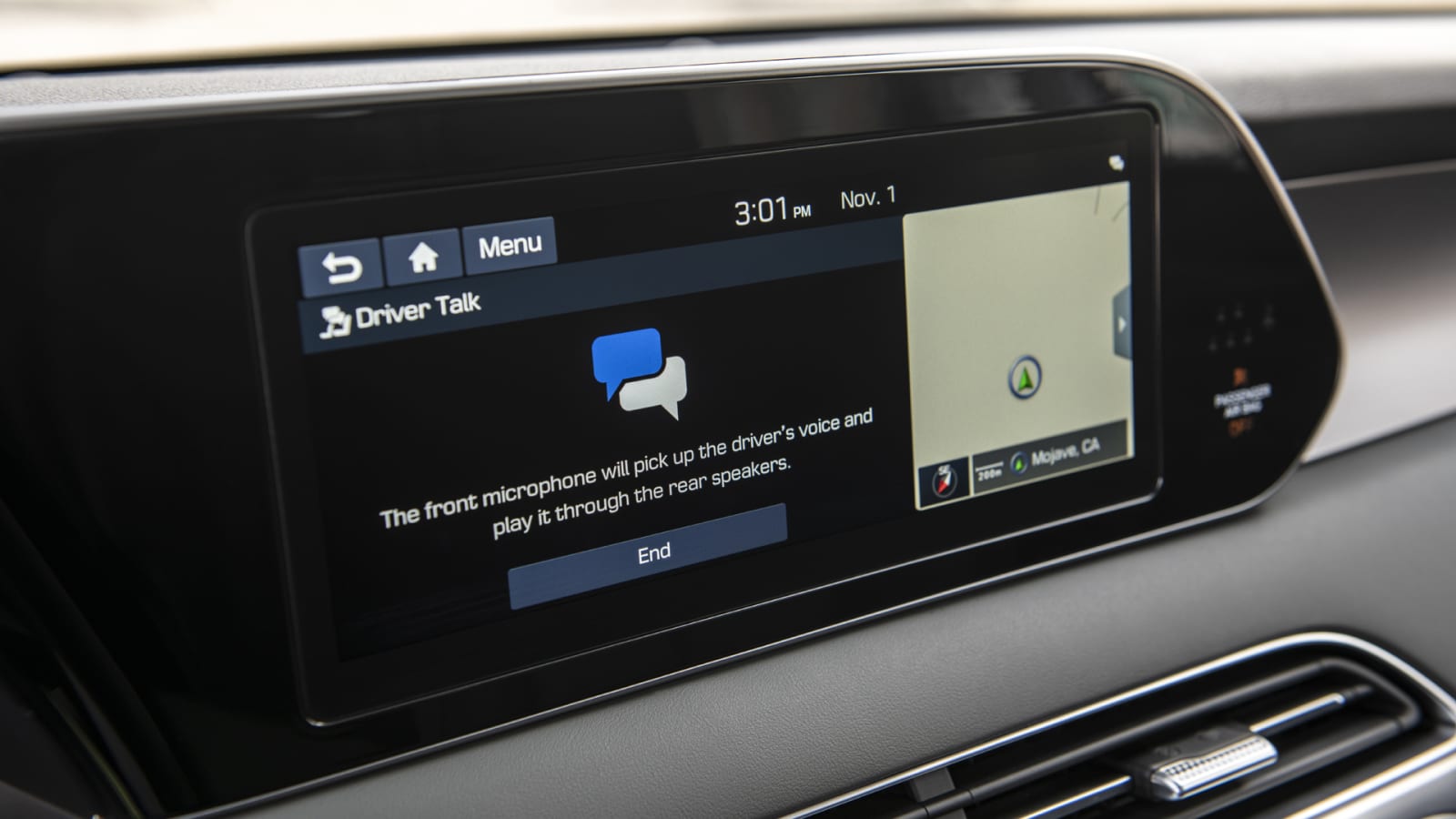 My friends also pointed out how crystal clear the upgraded rearview camera image was and marveled at the “overhead” shot that appears alongside the normal rearview image thanks to the extra-wide screen size.

“That is tripping me out, how is it doing that?” one friend asked. I explained it pieces together various camera images around the car, and although it’s certainly not unique to Hyundai, the Palisade’s system is definitely well executed.

In terms of infotainment, I can’t praise Hyundai’s new wide touchscreen enough. I’ve already written how it would be superior in one specific way to every BMW, but compared to anything really, Hyundai’s interface is user-friendly, easy to see, and looks perfectly modern to boot. The Mazda CX-9‘s infotainment system seems like an antique by comparison.

As for the features it controls, I got to try out the Driver Talk intercom function (shown above) that uses the Bluetooth microphone up front to broadcast the driver and front passenger’s voices to those seated in the back rows. My wife, seated in the spacious third row, didn’t know about Driver Talk and had this priceless reaction of someone suddenly hearing the voice of god from above. I think that’s pretty much what you’re looking for when you bark, “Stop punching your brother!”

However, my wife and three friends were more impressed by the seven USB ports strewn about the cabin, including in the third row. Having enough power for everyone has become the new cupholder in the family hauler game. 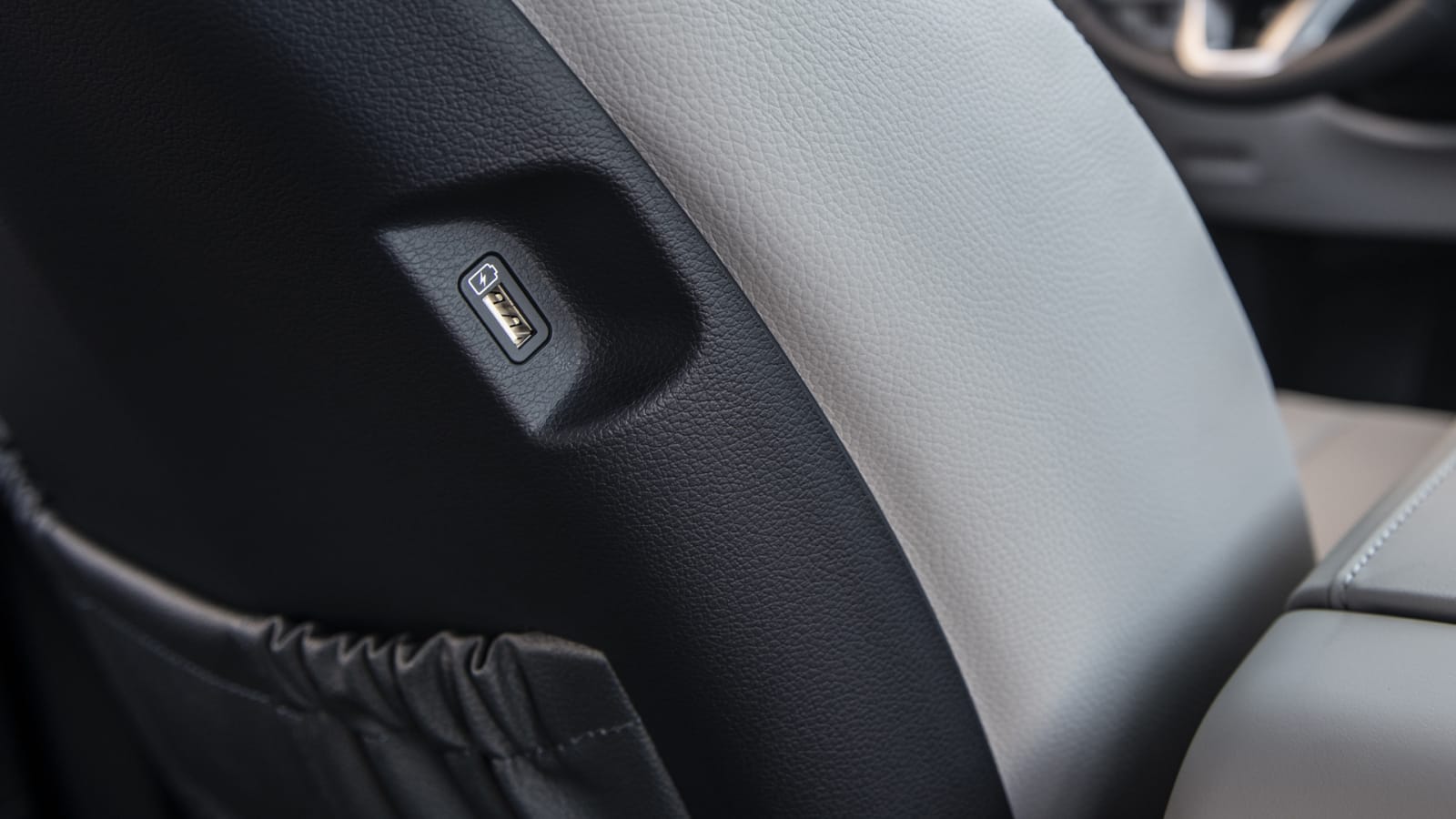 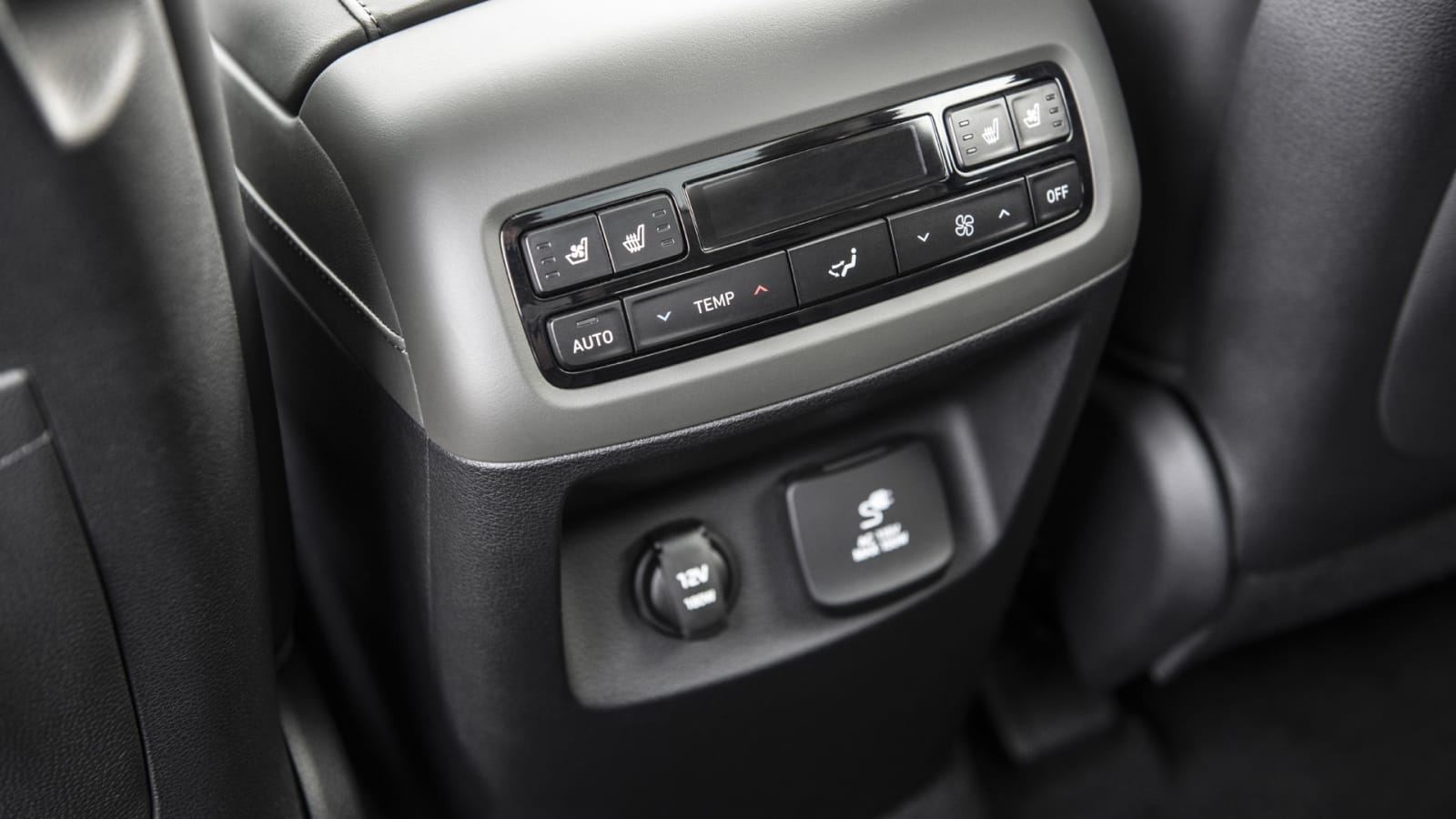 Unfortunately, I discovered that another source of power wasn’t quite up to the task. The Palisade includes a household-style electric outlet, which, as I discovered with the Ford F-150, is an invaluable tool when blowing up river rafts. The air pump I have (but didn’t bring) that plugs into a cigarette lighter is like a light cough compared to the full-bore one that plugs into a regular outlet. Yet, as I certainly should have known, not all household-style outlets in cars are created equal. Their voltage differs. The F-150‘s is rated at 120V to match my air pump, while the Palisade’s is rated at 115V. You better believe I’ll be checking such things in the future (or at least before I’m standing next to a river with four deflated rafts). Thankfully, our floating trip was saved thanks to the city of Bend, which we discovered provides posts with electrical outlets at another float-in point. That it was the last suitably warm day of the year helped, too.

Moving away from technology, this was my first opportunity to drive the Palisade with a full load of people aboard. We were also on a winding mountain highway at elevation, ranging from 3,623 feet in Bend to about 5,700 feet at the base of Mount Bachelor. The Palisade’s 291-horsepower 3.8-liter V6 was more than up to the task, never felt strained, and the eight-speed automatic smartly downshifted as needed.

However, the throttle response can be a bit strange, including when unladen, as there is occasionally a millisecond hiccup of confusion between engine, transmission and your right foot. It is very subtle and I’m guessing most people wouldn’t notice it. Still, it speaks to the fact that the Palisade is not the best choice for someone who prioritizes crisp responses and driver engagement. I don’t mind driving it, but I was also more than happy to turn things over to that excellent adaptive cruise control and steering assist system. And let me be clear, I’m not talking about driving “fun” here. The CX-9 is the sharpest knife in the three-row crossover drawer and there’s nothing fun about it. Rather, its controls and seat-of-the-pants feel are more indicative of the actually fun-to-drive car you traded when kid No. 2 arrived. It makes driving a family mobile a bit more palatable. A bit.

And so can buying a family mobile as otherwise well-executed as the Hyundai Palisade. It’s the real deal and it looks pretty good to boot. Perhaps there are a few too many visual notes, to paraphrase the Austrian emperor, but it stood out profoundly among the anonymous Subaru Ascents and Honda Pilots littering Bend. The Steel Graphite paint certainly helped. And when there’s style to back up substance, it’s hard to go wrong.

This California legislator is taking on SmileDirectClub